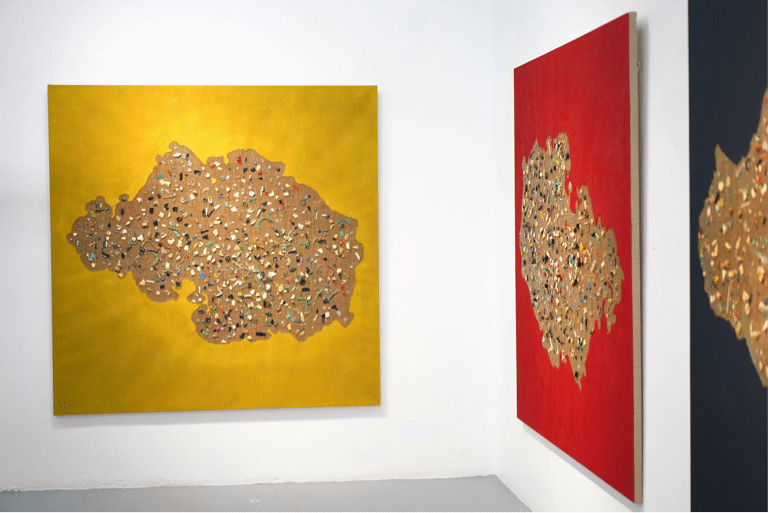 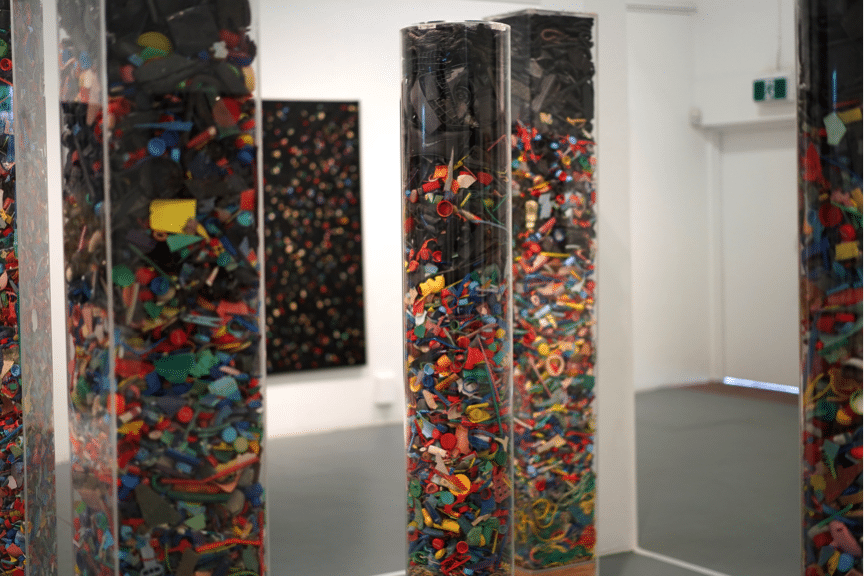 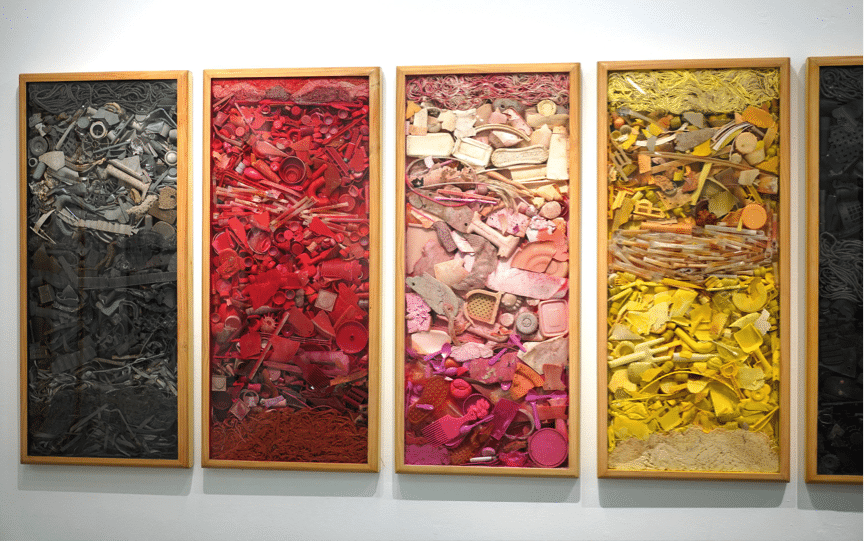 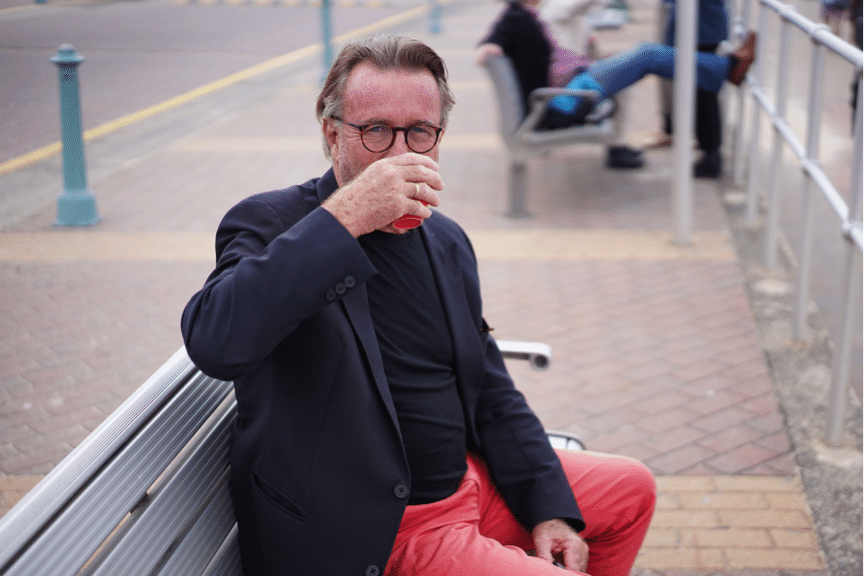 We met with environmental artist Dr. John Dahlsen for a cup of organic Green Tea and a chat outside Bondi’s Pavilion Gallery on the final day of showing his retrospective exhibition:

As an environmental artist based out of Byron Bay, Dahlsen chiefly works with found plastics and recyclables that wash up on Australia’s shores. His artwork exemplifies a commitment to express contemporary social and environmental concerns, and brings attention to the ever-growing issue of plastics in our oceans. Captivating and attractive in its own right, his art also shares a positive message about the aesthetic experience, and creates a dialogue with the viewer for bettering our planet.
Dr. Dahlsen has shown in countless successful group and solo exhibitions in Australia and around the world. In 2000, he won Australia’s oldest art award, the prestigious Wynne Prize from the Art Gallery of New South Wales, for his sculpture Thong Totems – a win that he cites as the launching point for his career. In 2017, he was awarded a Doctorate in philosophy from Charles Darwin University. While he continues to pursue art, Dr. Dahlsen is also an avid lecturer and speaker. He frequently guest lectures at many Australian and international universities, and has been a keynote speaker at major architectural and environmental symposiums both here and abroad.
We caught up with Dr. Dahlsen to learn more about his beginnings in environmental art, the abstract nature of his chosen mediums, and what he looks to convey with his artwork.

When did you begin creating art, and what prompted you to shift to environmental art?
I started off having exhibitions after graduating from the Victorian College of the Arts in Melbourne in 1979. I really saw myself as being a painter, working in that area and using those materials for about 7 or 8 years. I then moved with my partner into a beautiful home in Byron Bay. It had lime-washed ceilings and walls. This fascinated me because it reminded me of the driftwood that I used to collect and work with when I was in school. And I thought, ‘Well, I think I want to go back and collect driftwood from those remote beaches of southern New South Wales and Eastern Victoria.’ So I went back for a few weeks, and that’s when I noticed these plastics washing up. These weren’t there 15 years ago when I began collecting driftwood.
I became fascinated by these plastics, and for me it was an epiphany. Suddenly, I felt that I had this enormous meaning that I could express in my art. Social conscience, an environmental aspect, and still with a commitment to create objects of beauty. I put my brushes down and I didn’t paint again for probably 15 years.
Working in the environmental art space means that you use more abstract mediums than simple paint, could you tell us more about that?
It’s a funny thing because we think that they’re more abstract, but on the other hand it’s also very figurative objects that I’m working with. Bottle tops, little plastic soldiers found on the beach. Tons of little objects – they’re all things that, when kids see these artworks, they run up to them to look at a little spoon or a little Barbie doll in one of the sculptures, and they find it really fascinating. There is a figurative element there, even though I make them in a semi-abstract way.

For your found-plastic pieces, do all the plastic hunting yourself?
Yes, I have favourite spots in Byron, even just the main beach in Byron. I’ll walk up and down in the morning or afternoon. What I’m finding is that now a lot of people pick up plastics everywhere. They take a bag with them and it becomes a daily chore. It’s become a common thing. I think it’s great. In the early days when I was doing this 20 years ago or so, there wasn’t so much like that. I was collecting huge pieces of plastic that I found. Now, I’m largely collecting really small pieces of plastic. The current works that I’m working on – a series called The Pacific Garbage Patch, using these really small pieces of plastic to create the patch.
Can you tell us more about the Garbage Patch series?
The Garbage Patch series is based on the 2018 to 2019 mapping of the garbage patch that exists in the centre of the Pacific Ocean. People have asked me, ‘Is this the map of Australia?’ It’s actually not, it’s the current map of the garbage patch. Next year it will be different. It’s going to keep changing and it will probably get bigger. It used to be tiny. Five years ago, it was the size of Texas. Now it’s more than double that.

Looking at all the pieces in your retrospective, what do you most want to convey with your art?
Well, it’s really three-fold for me. It comes back to my thesis I did during my PhD titled Environmental Art: Aesthetics, Activism, and Transformation. Aesthetics is all about beauty. Activism is about the environmental component and making a statement. And transformation is that which becomes possible when people really allow themselves to enter into the work. That’s the something of ‘beyond,’ and that’s something that I hope people get the opportunity to experience with my artwork.

Do you find the perception of your art changes depending on where you’re showing, or are the societal and environmental concerns you’re addressing in your work by-and-large understood?
Yes, I think there is a universal consciousness of these issues. I’m just hoping that with enough of this type of approach of identifying them – where people are not being hammered with negativity for just existing – that they’re exposed to something where there’s a possibility of renewal. There’s always that possibility of turning something into the positive. Just like collecting rubbish on beaches, you can do something positive, and it can be beautiful as well. If that message gets across, it can only be a good thing.

Each week, The Organic Tea Project is sitting down with Australian creatives to learn more about their craft, inspirations, collaborations and upcoming projects. Be sure to check back next week for another profile, best enjoyed with a cuppa.