Previous Next
Australian Environmental Artist Creating a Sense of ‘Oneness’ 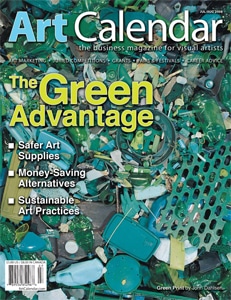 Few could have predicted that Australian artist John Dahlsen would have transitioned from representational painting to abstract painting and finally, for the last decade, to found object work — not even the artist himself. Yet today, the mixed-media/assemblage sculpturist is one of the most recognized and awarded environmental artists in the world.

In the mid-nineties, Dahlsen was gathering driftwood on the Victorian Coastline for a furniture project when he found huge amounts of plastic litter washed up along the shore. The artist accumulated 80 bags of the garbage and dragged them to his studio to begin his shift to a new medium. For the last 10 years, Dahlsen has continued to take walks along Australian beaches, collecting the debris he encounters. He then sorts through it and separates it by color to create new compositions that produce a narrative.

In his artist statement, Dahlsen acknowledges, “My challenge as an artist was to take these found objects, which might on first meeting have no apparent dialogue, and to work with them until they spoke and told their story, which included those underlying environmental messages inherent to the use of this kind of medium.” The work is photographed using a number of large format transparencies, which are drum-scanned and then stitched together to form a super high-resolution print of each image. Editions are small in print run, ranging from nine to 14 per each of the four sizes offered. Dahlsen sells his limited-edition, large-scale, high-resolution digital prints on canvas and paper for $15,000 or more each, with smaller prints between $2,500 and $7,000.

Throughout the years, his work has garnered a lot of praise. Dahlsen exhibited at the Florence Biennale of Contemporary Art in 2003, where he won an award for mixed-media/new media; won the prestigious Wynne Prize (the most recognized annual Australian art prize, in existence for more than a century) at the Art Gallery of NSW in 2000, was selected by an international jury to be a cultural ambassador and represent Australia at the Athens Olympics of the Visual Arts “Artiade” Exhibition 2004.

Not only has Dahlsen’s work been exhibited worldwide, including at the Australian embassy in Washington D.C., but he has lectured about his art form in front of hundreds of audiences ranging from 30 to 3,000 attendees, and has curated environmental art shows everywhere from Australia to New York. All this, and much more, because Dahlsen had the courage to pursue a form of art that forced him to let go of many of the predispositions he had about success in the art world and instead believe wholly in his art and its mission.

Art Calendar: I read that a fire destroyed your studio in 1983, taking seven years worth of work with it. Did this event influence your transition from painting to found objects?

Dahlsen: The fire incident, although a major occurrence at the time in 1983, didn’t directly affect my transition to working with found objects, as that period began in my work in the mid-nineties. It did, though, rock my very foundations as a person and brought me face to face with my mortality, which explained, for me, my immediate openness to the spiritual path, which had been hindered up until that point. I suppose it made the transition to be easier, though, as I became less rigid as a person in hindsight. It was this point also which triggered me to begin to work with my own issues revolving around my fathers’ suicide, which took place three weeks before I was born. Looking at these issues helped to transform me significantly as a person, and I’m sure helped me to become more open and able to make the required jumps when necessary throughout my life.

Art Calendar: Were you concerned about how your collectors or critics would react to the new work, or whether you would be able to make a living at all with your newfound medium?

Dahlsen: I found that, although I saw this as completely new work at the time, as I hadn’t seen this kind of work before, I had no doubt that it would find it’s place with both the art world and my collector base. I was simply so excited with discovering this new visual language completely by accident and with no influence by other artists before me. In fact, I was surprised how quickly collectors embraced the work. I think that most of my collector base sees clearly that I’m sharing a positive message about beauty that can be gained from the aesthetic experience of appreciating these artworks, in the use of color and composition, etc., as well as at the same time appreciating highlighting a present dramatic plight of our planet and also through the work giving examples of how we can recycle and reuse in creative ways.

Art Calendar: Did you market your work as “environmental” in the beginning?

Dahlsen: I never really marketed it as any particular style at first. The term “Environmental” simply grew the longer I worked with it and had its obvious commentary on environmental issues. At first, I called these works “assemblages” and “Contemporary Landscapes.” By now, my work has naturally grown over the years into this stronger concern for the environment. As such, I’m happy to be termed an “Environmental Artist.”

Art Calendar: You spend a significant amount of time giving lectures about your work. Tell us about that.

Dahlsen: Public speaking has occurred for me as a natural development with my work. I love to address audiences and feel I have a gift with delivering them. My many years in the past as an educator have aided this, with my lecturing at both the university level as well as in the secondary school level. Invitations to speak publicly keep coming these days, which I enjoy. I love to travel, and I’m paid well for it, which is a good acknowledgment. Plus, I believe the effect I have on my audience far outreaches the carbon footprint I’m making with the travel component of giving these lectures. I’m very fortunate to connect with people on such an intimate way in these lectures, as evidenced by how I regularly receive e-mails for weeks afterward from around the globe by people who have been touched by one of my lectures.

Art Calendar: How do you structure your lectures?

Dahlsen: My lectures begin with my giving the audience a blessing for “Oneness,” as this is something I believe the world needs the most at the moment. This is followed basically by a talk on my environmental art. I deliver these talks in speaking engagements all over the world. My target audiences range from participants in seminars and environmental symposium events and at corporate functions, to universities, exhibition openings and embassy events. I lecture about my knowledge and concern about environmental issues, particularly in relation to the power and effectiveness of art transmitting important messages about our environment. I deliver these seminars for various timeframes, from 20 minutes to one to two hours, depending on the target audience. The speaking engagements are delivered with both PowerPoint and DVD presentations, and involve an introduction about myself and some basics about my history as an artist, leading on to discussion about the importance of art, emphasizing environmental and ecological awareness. This leads into the PowerPoint presentation, where I project various images. Depending on the length and nature of the presentation, this can amount to anywhere between 70 and 200 images, followed by a question and answer discussion. In this time of image projections, I focus on the visuals around eight main aspects of this environmental artwork.

Art Calendar: You have chosen to be self-represented. How do you maintain such a strong focus on creating new work, while balancing it with the art of selling, booking speaking engagements, etc.?

Dahlsen: Being predominantly self-represented has also just happened gradually, toward the end of the nineties, and has continued to this day. I did market myself quite aggressively at one point, as I really wanted to make no mistake as to how I positioned myself. In many ways, this has worked, as I tend to rely more on my reputation these days. I’ve found that responding relatively early to the need for an Internet presence has worked wonders for me with international exposure and demand, and has made the decision of when to need to have dealers or galleries work for me a much easier decision to make. Some of the challenges I experience as a self-represented artist are based around the uncertainty of future projects, as I am not in a usual cycle of X number of exhibitions per year, depending on the number of galleries representing a particular artist. But that said, I have found it usually has a way of working itself out, and I quite like the randomness of it all. I could never become a production line, which probably explains, in part, the variety of work that I make as the years go by. I maintain a strong focus on creating new work, while balancing it with the art of selling and booking speaking engagements by attending to my personal life equally, with the same amount of vigor and enthusiasm as I have for my art, so that I have the inner strength to not let the business side of things weigh me down in my career. I think this is important, to have a good balance. To get plenty of exercise, have lots of harmony with nature and meditation to help with it all. I also live in one of the most beautiful places on the planet. Try Googling “Byron Bay” in Australia, and you’ll see what I mean! Although it, like all places on our planet, is facing potential unheard of climate changes, unless we humans change our ways now.

Art Calendar: What next in your career?

Dahlsen: I am open to surprises, and they just keep coming. Teaching others about the importance of the environment through delivering more lectures about my art in public speaking engagements does interest me, particularly as you can see from my Web site that I have been a hugely prolific artist over the years, and I have lots to lecture about with heaps of visuals. I think this will go hand in hand with creating new work, as I’m also really enjoying the possibilities I see in my re-entry into painting. This excites me to no end at the moment.

Art Calendar: Ultimately, what do you hope viewers get from the work you’re producing?

Dahlsen: A sense of Oneness with everything.

For a list of current worldwide exhibitions, information on his public speaking or to view more of John Dahlsen’s work, visit www.JohnDahlsen.com. Louise Buyo is the editorial intern at Art Calendar. She works as an art consultant at Hoypoloi Gallery in Orlando, Florida. She can be reached at LBuyo@ArtCalendar.com. Kim Hall is a Florida artist who serves as Art Calendar’s Editor. She can be reached at khall@ArtCalendar.com. 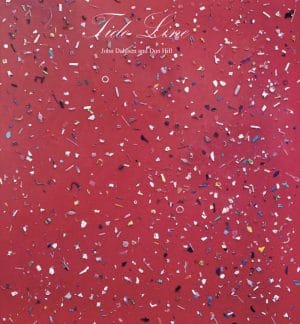