Previous Next
The transformative power of environmental art: Creating beauty from plastic waste 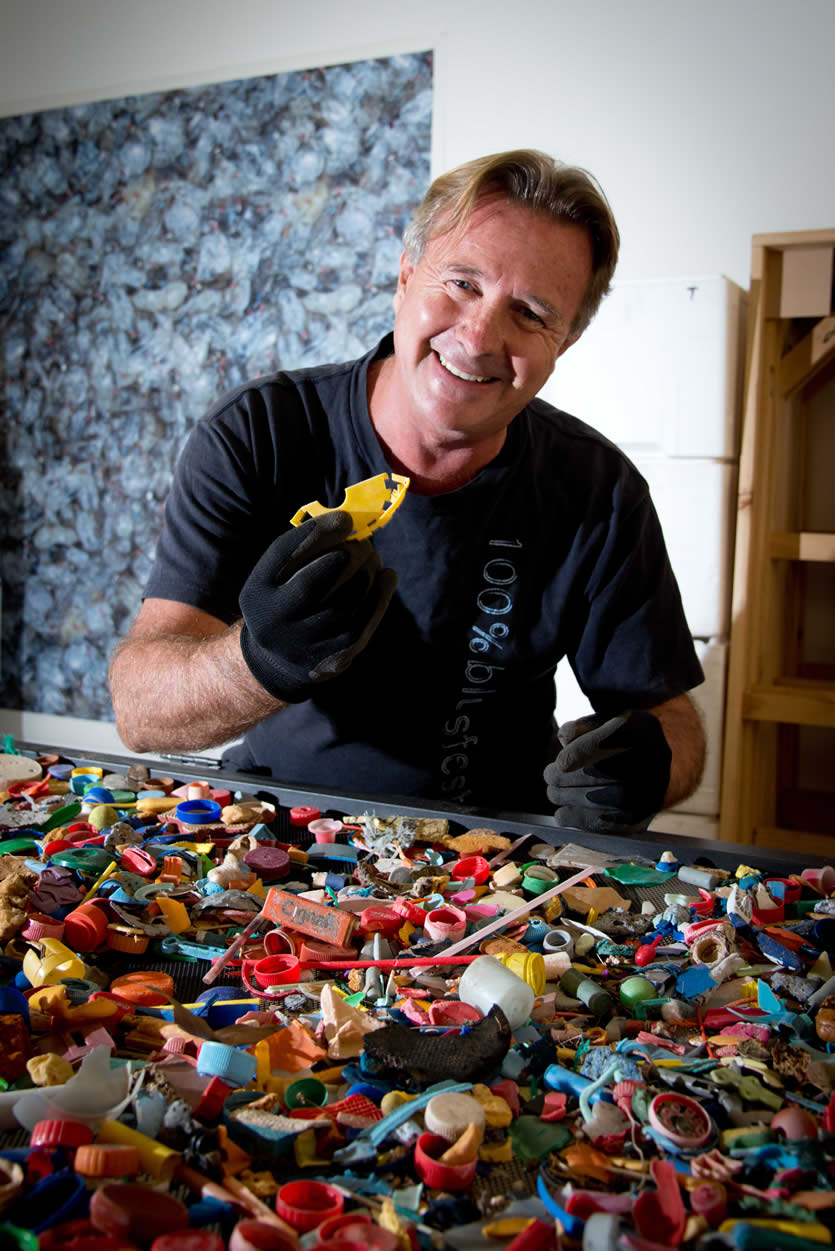 John Dahlsen is an environmental artist based in Byron Bay. 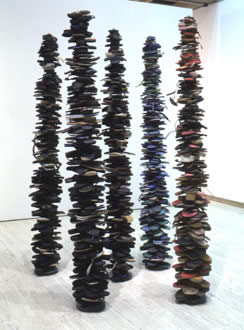 The Thong Totems sculpture won the Wynne Prize in 2000. 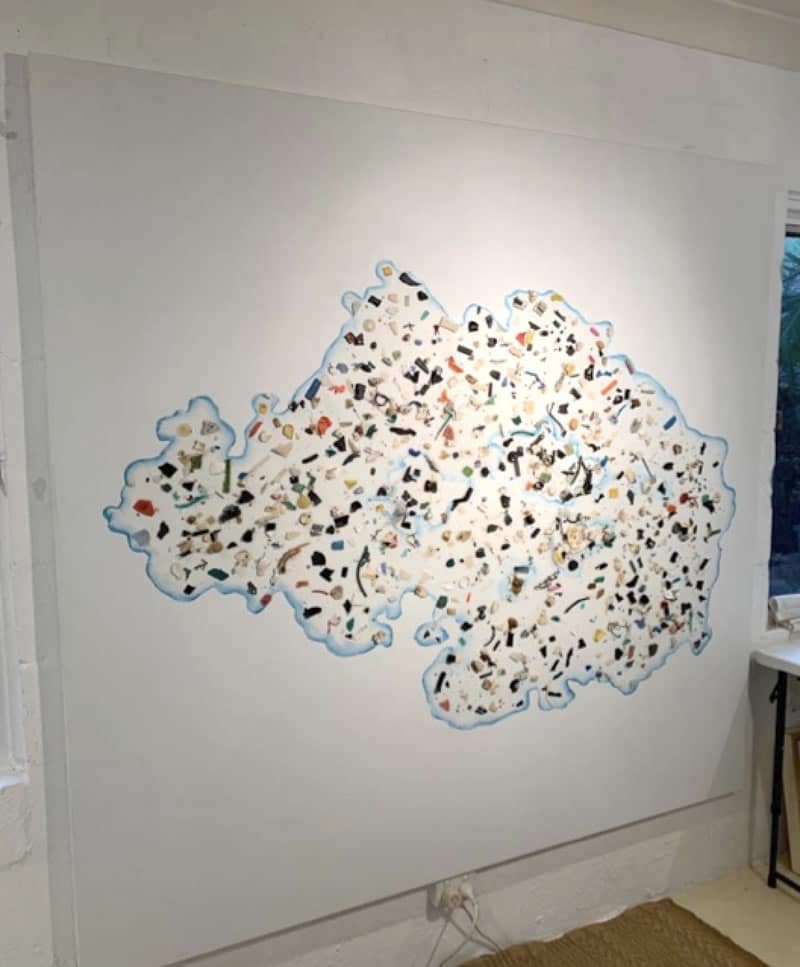 Environmental art in the studio from the Garbage Patch series.

When John Dahlsen first started experimenting with what would soon become his creative medium of choice, it had some of his friends slightly worried. The huge piles of plastic rubbish – all neatly sorted by colour – that had taken over much of the available space in the artist’s house certainly raised eyebrows. “Some of my friends asked me if I was OK”, the Byron Bay based environmental artist remembers laughingly.

But what may have initially looked like an odd quirk, turned out to be a tremendous source of inspiration for John. An influence so big, that it would change the course of his career. The artworks he created from plastic rubbish washing ashore on local beaches catapulted him into the Australian art scene and helped him win international acclaim.
John received the prestigious Wynne Prize for his Thong Totems sculpture in 2000 and was selected as a finalist in 2003 and again in 2004. His work featured in exhibitions in Florence, Milan, New York, Beijing – and countless places in between.
Absolut and Nespresso commissioned work from him to raise awareness about plastic pollution and recycling long before the David Attenborough effect brought the issue into the mainstream.

All of this was set in motion by happenstance. In 1997, John discovered the potential of plastic rubbish as a means for creative expression while scouring remote beaches in Victoria for driftwood to make furniture. “I noticed all this plastic washing up, so I started picking it up with the intention to take it to the local tip for recycling,” recounts John.
And he collected a lot of it. In the end, there were over 60 jumbo garbage bags full of plastic waste waiting to be taken away. Yet, there was something about the shapes and colours of his find that made John pause. “I hadn’t seen anything quite like it before and started to wonder how it could be used creatively.”

“We are continually shaped by the forces of coincidence.” – Paul Auster

With a background in painting, the artist had to invent new ways of working with the material and he began to experiment. Many of his creations still look like contemporary landscape paintings from a distance when they are in fact made up of jumbled up pieces of plastic behind Perspex.
Soon, John saw the need to use bigger items like thongs, coke bottles and buoys and began working on his series of totems. “I learned then that totem means symbol of a clan and I couldn’t think of a more fitting description. My totems are a symbol of the current state of humanity.”

While it would have been easy to create a shocking display from his beach finds, John decided to take a different approach. “There’s limited appeal to getting onto a soapbox. My aim was always to make people think by bringing beauty into their world and giving them a positive way to respond”, he says.
Aesthetics, activism and transformation are the underlying principles of his creative process. “I have a strong commitment to the expression of beauty”, says the environmental artist. “My activism comes from making statements through the choice of material rather than shock value.”

“The great solution to all human problems is individual inner transformation.” –  Vernon Howard

The transformative aspect of John’s art takes many different shapes. It also applies to both the creator of the art and the viewer: “I’m a very process orientated artist and my last work will always inform the next one, so there’s natural creative evolution.”
In its most literal sense, transformation can be observed in John’s Pacific Garbage Patch Series which is inspired by satellite images that record the ever-changing shape of the giant island of garbage floating in the Pacific Ocean.

Showing the impact of our lifestyles on the environment – which is all too often invisible in our daily lives – invites the art viewer to start a process of personal transformation.

The plastic problem is evolving – but it’s far from being solved .

Having worked as an environmental artist for over two decades, John has noticed a shift in how his art is perceived by the general public – not least due to initiatives such as the Plastic Bag Ban in Australian supermarkets and the Blue Planet II documentary.

“When I started working with plastic waste, many people didn’t know what to think and there were only very few artists in this space”, he recalls. Now he observes a lot more awareness for the issue of plastic pollution in general and artworks with a social conscious have become centrepieces of large-scale exhibitions like Sculpture by the Sea.

But despite an improvement in public awareness and clean up programs such as Take 3 for the Sea, John has yet to return from one of his beach-scouring missions empty-handed. “If anything, it feels like the problem has intensified,” John says. “Especially on remote beaches, I still pick up a lot of plastic. And on the more popular beaches, it’s often much smaller pieces of plastic that are missed during clean up walks.”

“The power to question is the basis of all human progress.” – Indira Gandhi

It’s this observation that has inspired John’s latest work Interior Detail which is an abstract of small plastic pieces embedded in a plant based sustainable resin on a red background on Belgian linen. “The artwork represents the thousands of microplastic pieces we ingest through various food sources,” says the artist.

And so, it seems that there’s still a long way to go until John will run out of raw material for his art – a scenario that he’s been contemplating since the beginning of his career in environmental art. When reminiscing on the first media interviews he gave as an environmental artist, one of the questions he was asked repeatedly was: How would you feel if there was no more plastic to use in your artwork?
John’s answer then and now: “It would be a wonderful celebration.”