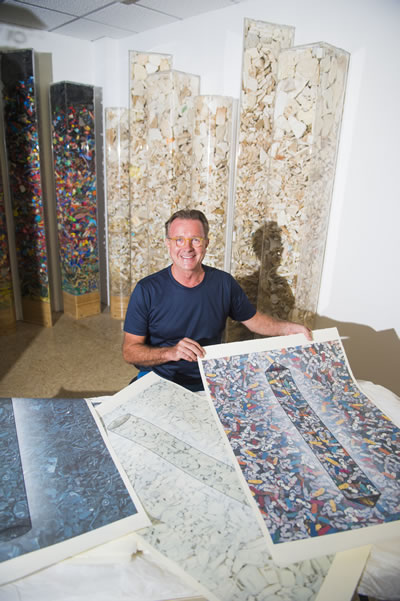 ‘John Dahlsen embodies the spirit of all Australians who love our coastline. His contemporary work is the very core of what makes Clean up an important community event in our nation. His concepts are abstract and imaginative and he has turned the flotsam and jetsam washed up on our beaches into highly collectable art.’
Ian Kiernan, AO, Chairman and Founder Clean Up Australia & Clean Up The World.

John Dahlsen’s barefoot story of how he turned ‘found rubbish’ on Byron Bay’s beaches into meaningful, collectable art is a fun and inspiring tale.  His art provides a valid commentary on our wasteful, throwaway society and his lively speaking presentation challenges people to think about how they can make a difference to our environment.’
Kim McKay, AO, environmental campaigner & author; Co-founder Clean Up Australia & Clean Up the World

‘At the Mystic Aquarium & Institute for Exploration the audience listened with rapt attention to John Dahlsen’s lecture while they viewed slides of his artworks. John’s words and images drew them into his world and inspired each person to care deeply about this world we share.  The strong symbolism and natural beauty of the works themselves captured the spirits of all in attendance; his statements are profound.   All were impressed with John’s depth of knowledge of current environmental issues.  John Dahlsen’s insightful work is an inspiration to all who care about our world, and all who learn to care, as they view his art and hear his words. We were thrilled to have met and learned so much from this distinguished artist.’
Suzanne Starr Art Educator and North Stonington Education Board Member Connecticut USA

‘Your work has had a profound effect on me since I discovered it for  the first time at the Powerhouse Museum in Sydney, when I was wandering round with my 3 year old son, 3 years ago.  The totems stopped me in my tracks, and I was drawn to look closer to find out what they were made of… when I discovered that they were made from plastic bottles washed up on the beaches I felt the impact of your art in my mind and in my heart.  Not only were they beautiful, they had a strong message to awaken the consciousness of the “asleep” – to see what is happening environmentally on the earth created by humanity’s ignorance. This filled me with inspiration, and changed the direction my work was taking. It was then that I realised I could make art that would be able to shift consciousness to a deeper place.’
Alison Laird Kapiti Coast NZ

‘The power of Dahlsen’s work lies in the artist’s abilities to witness the beauty in the every day and the mundane. However, it is his history as a painter that gives him the ability to see the objects he collects in their purest form, that is the shape and color.’
Brett Adlington, Curator, Exhibitions and Collections. Gold Coast City Art Gallery QLD

‘Years of abstract /figurative painting… inspired by living organic forms often monochromatic, smoothed transition to his present exhibition of works. … His flotsam collection acquired at the same time as his driftwood evolved into a further dramatic phase. … ‘Contemporary Landscapes’ his mammoth task – afforded him a freedom to demonstrate aesthetic possibilities which radiate vitality and joie de vivre, uncommon to most artists deeply conscious of environmental issues’.
Review of ‘Contemporary Landscapes’ exhibition by the respected critic/artist and trustee of the Queensland Art Gallery, Catharina Hampson.

‘The successful artistic expression of an abstruse concept such as universality is difficult to achieve, but ultimately rewards both artist and viewer. It is what lies beyond the boundaries of abstraction and figuration that intrigues John Dahlsen and he has developed a unique visual language to articulate this. Dahlsen has only arrived at this crucial stage in his work after a course of exploration, both in a personal and artistic sense….’
Sandra Murray: Director – Lawrence Wilson Art Gallery, University of Western Australia

‘John has been working on a very successful new body of work that extends from his previous enviro sculptures into paintings. They are of the places he has collected detritus for his sculptures. The subject matter also happens to be Byron Bay, a place of infinite beauty and great affection. ‘
Steven Alderton, – Director of the Lismore Regional Art Gallery NSW Australia.

‘Few could have predicted that Australian artist John Dahlsen would have transitioned from representational painting to abstract painting and finally, for the last decade, to found object work — not even the artist himself. Yet today, the mixed-media/assemblage sculpturist is one of the most recognized and awarded environmental artists in the world.’
Kim Hall, Florida artist-  Editor New York Art Calendar Magazine

‘Dahlsen, is an optimist. To begin with, he’s already made a positive statement by clearing off the unsightly stuff that is lethal to fish and fowl. (Australia’s wildlife conservancies adore Dahlsen’s work, which was hardly his intention, but so be it.) Piling up black combs, disposable razors and pieces of rope yielded a Louise Nevelson-like sculpture with attitude.’
John T. Spike – Director of the Florence International Biennial of Contemporary Art.